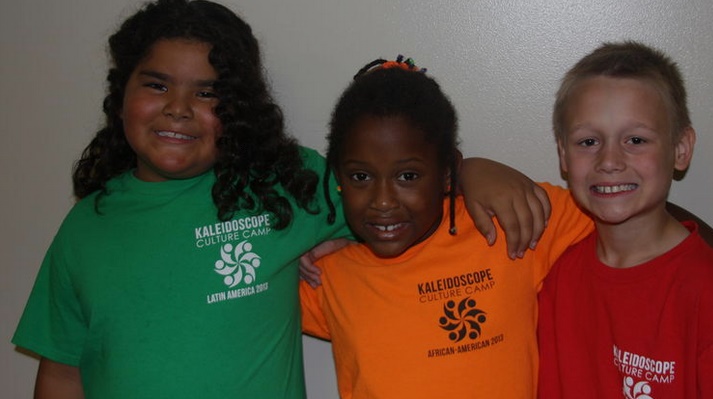 Bringing together over 100 children from all around Chicago and the Chicago suburbs, Kaleidoscope Culture Camp works to educate children in adoptive and foster families about their birth culture. Adoptive families seek to give their children a chance to experience the food, fun and music of their birth countries at this annual camp. Some parents choose to send their biological children to share in learning about their sibling’s birth heritage.

The Eastern Europe camp theme this year is focused on the 2014 Sochi winter Olympics. In one activity, children from the EE camp are making Olympic themed decorations for the Museum of Science and Industry’s annual Christmas Around the World & Holidays of Light celebration.

Latin America camp is focused on the treasure of the Rain Forest. Children from Guatemala and Colombia are learning to weave on back strap looms, and practice making traditional foods like jugo, tres leches and other treats from the region.

Korea, India, Southeast Asia “KIS” – “KIS’s” theme is “A Day in the Life” of a child from these countries. Whether making kulfi or kim chi or building model dragon boats, the kids try something new.
Camp Director, Lisa Garay says that “Camp is a week to be immersed in the children’s birth cultures. Instead of the day to day distractions of school and kid activities, you are able to focus on the food, language and stories of my children’s birth country, Colombia.” The week finishes with an Open House celebration where native crafts are displayed. Friday’s finale closes camp with a children’s performance of international songs and dances, and a Parade of Nations with children in the traditional dress of their birth countries.

Registrations will open for next year’s camp in Spring 2014. Interested families can join the camp mailing list at: CultureCamp@caffa.org. Kaleidoscope camp is housed at Trinity Church in Roselle, IL and is an all volunteer run program. Kaleidoscope is a program of CAFFA, Chicago Area Families For Adoption. A predecessor culture camp, Hands Around the World, was run at this same site for over 20 years.